If you are interested in discovering the beautiful places hidden on Pantalica and the nearby Anapo Valley (Valle dell’Anapo), this is the right place!

Pantalica is the largest necropolis of the entire Mediterranean. It is composed of thousands of tombs (about 5000) excavated by man divided into different areas dating back to different epochs which we will discuss later.

These tombs are located in a magical natural landscape full of valleys, plateaus and canyons. Magical places where nature reigns supreme. Here you can hear the wonderful melody of different species of birds, the winding of the wind on the tree leaves and the loud and slow movement of the two rivers surrounding Pantalica.

In fact, Pantalica is a plateau of about 400 meters above sea level, surrounded by the river Anapo and the Calcinara stream (its tributary). That made Pantalica an impregnable fortress. The place where Siculians, Sicans, Greeks and Byzantines succeeded in gaining a strategic Sicilian point. 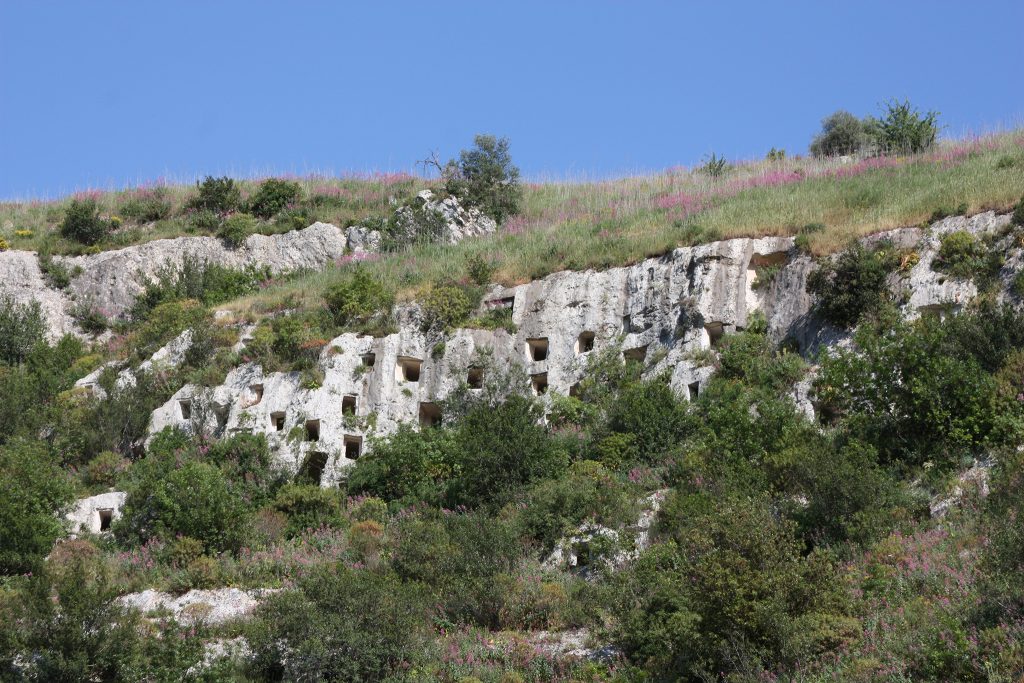 Thanks to these settlements, from the 13th century BC, the beautiful tombs of various forms were excavated in the rock which, over time, have also become rocky houses with adjacent Byzantine churches. Something you will not want to miss.

At the center of the plateau are the ruins of Anàktoron, the palace of the prince. This is the highest point of all Pantalica from which it was possible to see the enemy before the attacks. Indeed, it is here that the prince decided to build his home. The village, on the other hand, is thought to have been built all around the castle, made with modest wooden huts, of which there is no trace left today. 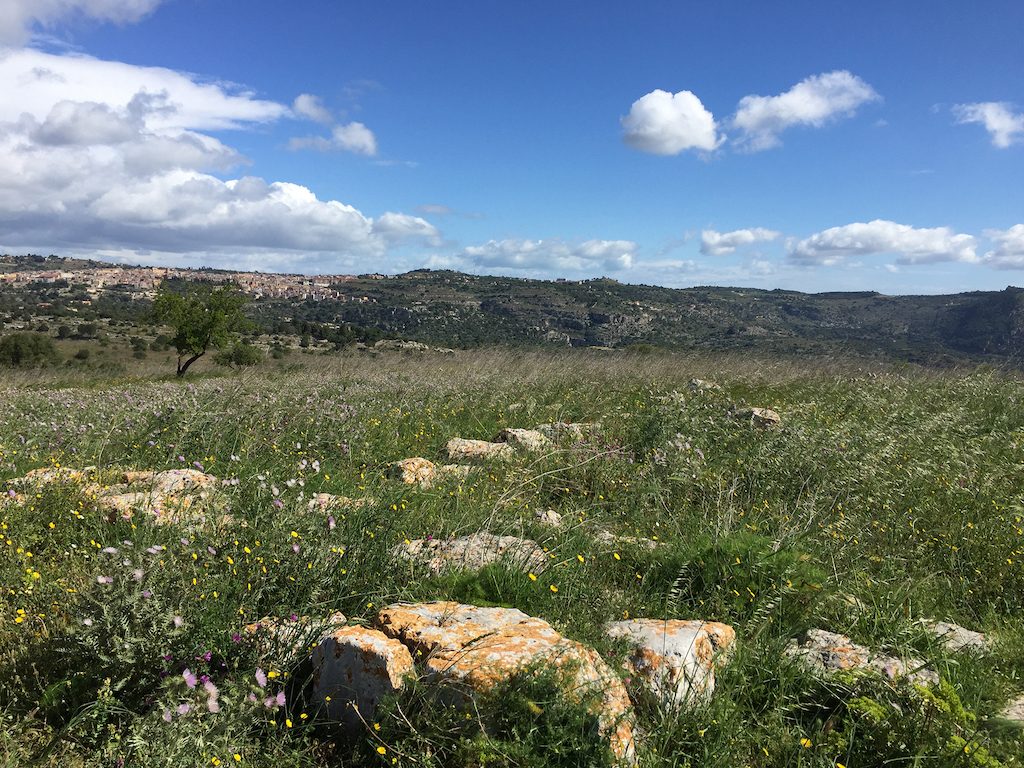 As I was saying, Pantalica was made impregnable by the two rivers surrounding it, the largest of them, the Anapo, created the homonymous valley where it is possible to make easy walks along the river bank that creates spectacular lakes where you can cool off in harmony with the colors and perfumes of the beautiful flora.

The path of the Anapo’s valley (Valle dell’Anapo) is traced from the former Siracusa – Vizzini railway built in the early 900. Today there is nothing left of the tracks on which the steam train passes, but there is still an enchanting dirt road that is immersed in the ancient, fresh and dark tunnels. The old railway station today is used as a museum.

There are so many trails and paths that you can walk on foot. All spectacular and immersed in nature. There are thousands of tourists coming from all over the world to see this glimpse of land become a UNESCO World Heritage Site in 2005.

Naturally, going to Pantalica and the Anapo valley is not easy. With this, I do not want to discourage you, but if you are a guy who does not like walking a lot, Pantalica and its beautiful valleys are not for you

Tracks do not require any particular athletic preparation, but you need to have a few kilometers in your legs. This because the trails have some slopes, very affordable, but for those who are not used to walk a hundred yards, that’s can be a problem.

Getting to Pantalica is relatively simple.

If you are coming from Catania or Siracusa, take the A18 motorway towards Sortino. Once in Sortino you can follow the signs for Pantalica or Valle dell’Anapo.

Pantalica cannot be visited all in one day. On the first day you’ll discover it, smell the flowers, immerse yourself in the history of man as if you were at another age, where everything was simpler, purer. You can visit wonderful areas, Byzantine churches, rock villages, tiny graves excavated in canyons with archaic stone tools. You can feel the atmosphere that was once, the smells that are still the same. You can wade the riverbeds and also see where the Calcinara torrent rises. You’ll be so amazed that you’ll want to come back again and again.

Pantalica is all to discover. Points, however, are not always well indicated because now the signs are old and left to rot.

Visiting Pantalica autonomously is it possible? Certainly, but only if you want to explore places you do not know by considering the fact that you can miss the magic hidden places, not reported by the filthy directions, and the fantastic story behind them.

If you want to find out all those places not shown in the maps, the myriad of beaches that could escape to those who do not know the place well. If you want to know the story as you go on the paths that seem unexplored, if you want your sight to lose through the stunning breathtaking views, if you want to see Pantalica from a different perspective, you just have to rely on an expert guide that will bring you in fabulous places, respecting your time and your breaks. A guide that will take care of you throughout the trip. You just have to do one thing: enjoy the wonders of Pantalica and, of course, walk!

There are wonderful places out of the classic stages nobody talks about. There is, for example, the Galermi aqueduct built by the Greeks after Gelone defeated the Carthaginians at Imera in 480 aC. Which still brings water to Syracuse today, following the Greek theater.

Exciting are the famous natural caves such as the “Cave of the Bats” and the “Trovata Cave“. Even more so is the “Cave of the Jump“, for many unknown though interesting, interesting to visit because it is possible to get out by running a 3 meters jump. Of course you can also go back from the front door.

In these caves, especially in the cave of bats, in ancient times the guano produced by these extraordinary animals was used to produce the gunpowder. Even today it is possible to see the mills where this dust was made.

Have you ever seen the point where two rivers meet? Have you ever plunged your hands in this point by noticing the difference in temperature between Anapo and Calcinara? A unique experience to repeat over time.

We hold the real Pantalica secrets and we would like to share them with you. Authentic wonders of our ancestors that remain unchanged over time. If you want to embark on Pantalica’s journey through history, the only way is to go there with a naturalistic guide to revive these moments that, like the pastor Paolo Carpinteri (quoting the book by Vincenzo Consolo), accompanies you in the ancient Hybla on Goat paths, cave-dwellings, in sanctuaries dug in the steep rock peak on the waters of Anapo.

Like Paolo, we will point you to the various species of plants, we will let you try the perfume of the thyme, we will let you hear the song of the pilgrim falcon. We will tell stories that not many know, like the story of Biddina, a fantastic “dragon” that swallowed goats, sheep, donkeys and men!

If you want to live the TRUE Pantalica, told by the experts, leave your data below and we will contact you as soon as possible!

If you want to live the TRUE Pantalica, told by the experts